Home »Archive»North and South Korea meet through handshakes and art 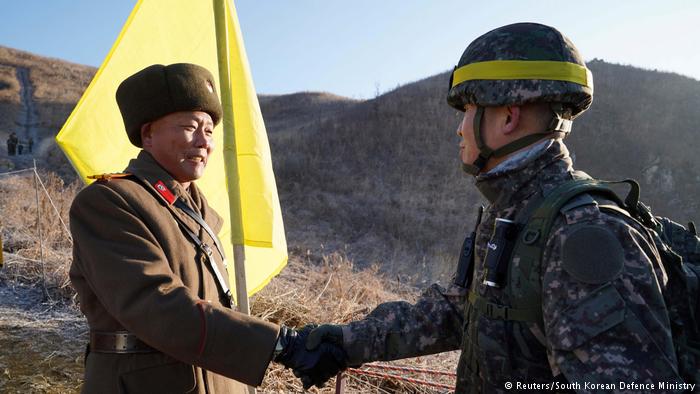 On Wednesday, soldiers from North and South Korea made several peaceful crossings into each other’s territory for the first time since the countries were divided. The soldiers were inspecting the dismantlement of 22 guard posts — 11 from both countries — inside the Demilitarized Zone (DMZ), the buffer zone between both countries, which, contrary to its name, is the world’s most heavily fortified border.

It was mostly a symbolic gesture, since many more guard posts still remain, but as South Korea’s president Moon Jae-in pointed out, the action was “a new milestone” in inter-Korean history that was “unimaginable in the past.”

Just like the photos and video footage of soldiers chatting and sharing cigarettes contribute to changing the image both countries have of each other, another type of imagery unites them as well, as the exhibition “Rückkehr von Jeong Seon – Alter Meister, Neue Geister” (Return of Jeong Seon – Old Master, New Minds) in Berlin shows.

Mount Kumgang, or Geumgangsan, which translates as Diamond Mountain, has always been a muse for Koreans. Poets and artists have been celebrating it in their works since well before the Middle Ages.

One Korean painter most famously revolutionized art through his depictions of the peak: Jeong Seon (1676-1759), who is credited as the father of “True View” landscape painting. The label refers to landscape painting techniques specifically portraying Korean scenery. Before him, “Korean artists were all orientated towards China. Jeong Seon was the first artist who made it popular to paint Korean landscapes,” explains the exhibition’s curator, Kwang Lee from the international art association Kunstverein 64 e.V. 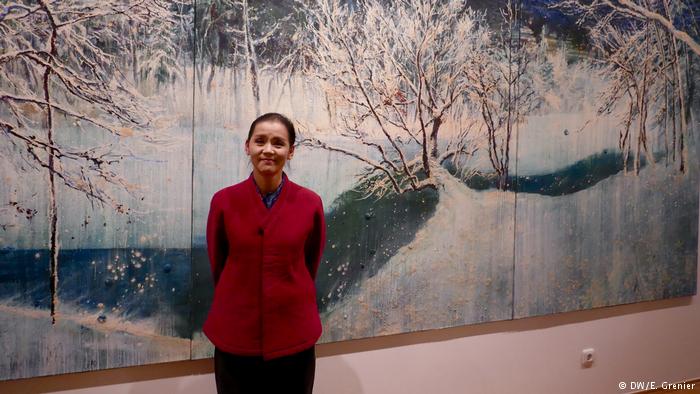 However, since the mountain is located in North Korea, South Koreans were unable to visit their treasured site for 50 years, after the Korean peninsula was divided in 1948. North Korea progressively opened it to South Korean tourists starting in 1998.

Jeong Seon’s approach still influences Korean artists from the North and the South to this day, and the show that opened at the Berlin Office of the Representation of the State of Saxony on Wednesday is the first official German exhibition to display works from both sides of the border, displaying painters inspired by the ideas of the old master. 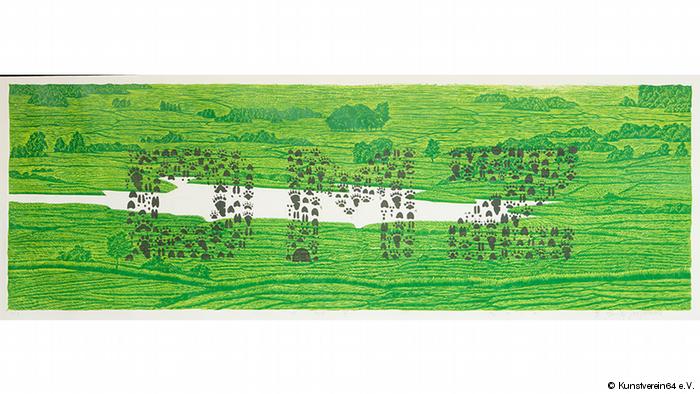 “DMZ,” the name of the buffer zone between North and South Korea: a woodcarving by South Korean artist Yeon-Bok Yoo

Holding the exhibition in a state building also served to represent the ties between Germany and Korea. Germany’s own experience of division and its peaceful reunification provide an inspiring model for Korea.

With the upcoming the 30th anniversary of the fall of the Berlin Wall in 2019, different special projects with Korea will aim to consolidate the already important ties between the two countries, says Hartmut Koschyk, co-president of the German-Korean Forum. He cites for example an upcoming digital game that will allow users in Berlin and Seoul to reflect on borders and divisions, called “Mauerspechte – von der DMZ zur Berliner Mauer” (Wall-Woodpeckers — from the DMZ to the Berlin Wall). 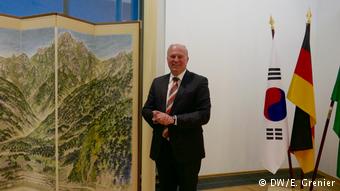 Kwang Lee first came to Germany 20 years ago to study art in Europe without thinking much about the parallels between both countries. It is through her professor at the Düsseldorf Arts Academy, artist Markus Lüpertz, that she began reflecting upon her identity, about Korean traditions and the common aspects in German and Korean history.

The parallels can also be drawn in the countries’ artistic production. Just like in former East Germany, Kwang Lee points out, the artists from North Korea work under the tight control of the regime, promoting the state’s official ideology.  For example, the landscapes painted by these artists are “not as personal” as the South Korean interpretations; the North Korean artworks rather serve as a direct demonstration of how powerful these mountains are, says the exhibition’s curator. 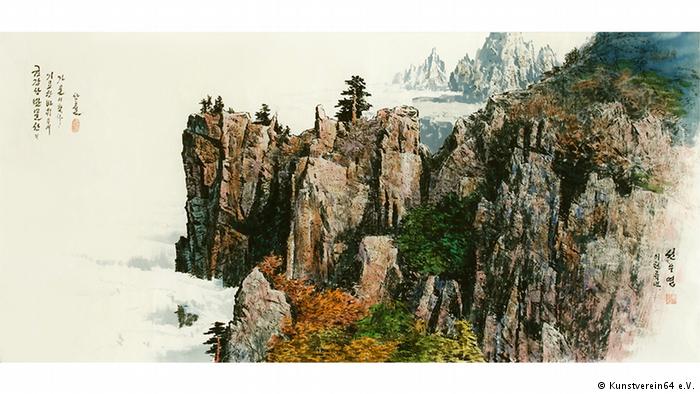 “Fall is coming on Geumgangsan”: A painting by North Korean artist Woo-Young Sun

North Korean artists mainly work in an enormous complex in Pyongyang, the Mansudae Art Studio, which is basically one of the largest art factories in the world. Some 1,000 artists and 3,000 assistants produce works for Kim Jong Un’s regime, churning out propaganda monuments, paintings and even the Kim pins worn by all North Koreans.

While the way art is produced is obviously distinct in both parts of Korea, hopes that a shared cultural heritage may contribute to improving diplomatic ties is not only a concept celebrated in Berlin. During his visit to Kim Jong Un in North Korea last September, South Korean President Moon Jae-in was guided around the massive art studio.

In a guest book, Moon wrote: “I wish that art would become a bridge connecting South and North Korea as one.”